At first glance, Kate Ballis’ candy-coloured landscapes are reminiscent of the hand-tinted photographs that were prevalent in the mid-19th century, but these gorgeous popsicle-palette images were created with the aid of a specially converted infrared camera as opposed to a paintbrush. “I first came across the technique at the Venice Biennale in 2013, where Richard Mosse had used the process to represent the violent conflict in the Eastern Republic of Congo,” she explains. “In his work it seems like he’s subverting these horrors and creating something aesthetically beautiful.”

Ballis tells me all of this over the phone from a remote location in the Chilean desert, where she is continuing the Infra Realism series in locations far more hostile and far-flung than the Californian suburbs. “Tomorrow we head over the border to Bolivia, then we’re going to Peru,” she says. The journey doesn’t stop there; she will also be travelling through Arizona before heading back to her native Australia, to photograph Uluru, or Ayers Rock. 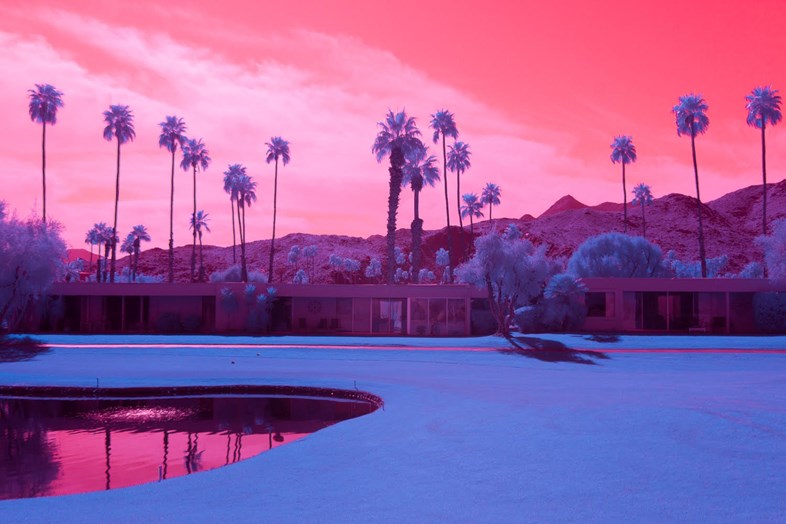 Whereas Mosse’s work seeks to engage with the unsettling, overlooked horrors of war, Ballis’ series is all about the essence of life itself. Her images of arid Californian neighbourhoods are populated with succulents and palm trees that pop with vibrant shades of blue and green against blazing magenta skies and blood red swimming pools. “My photos are capturing something otherworldly. We take it for granted that the sky is blue, that it fades into the background, but through infrared everything is subverted and suddenly the sky is pushing against the picture plane. My work, in that sense, straddles science and magic, providing a glimpse into the unknown, making the unseen, seen.”

Ballis originally chose California, particularly Joshua Tree and Palm Springs, for the first instalment of this project because of the way nature and architecture coexist in those areas. “In these suburban spaces you have these beautiful mid-century properties that are painted in these subtle pastel hues, so they are almost camouflaged against the surrounding desert. People also spend so much time cultivating their gardens full of succulents, but they end up just disappearing into the landscape.” 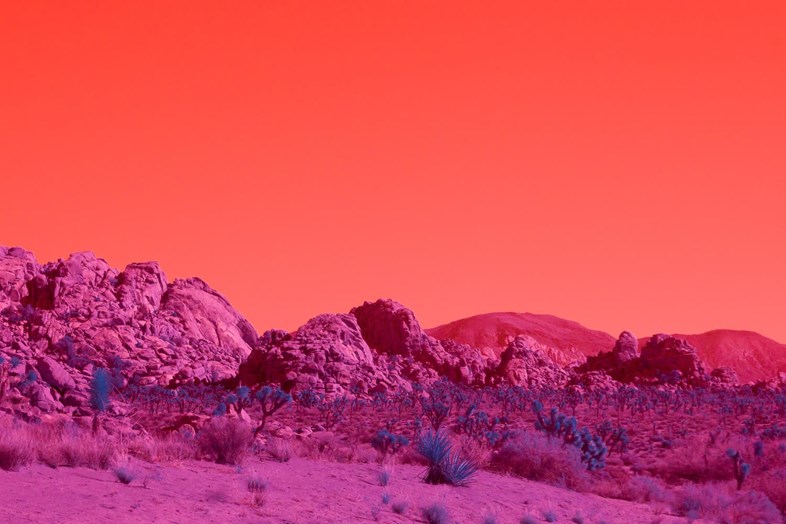 By using her infrared process Ballis reimagines a surreal world populated by a jarring cacophony of colour, inviting you to question what you already know about the world around you. “All of my work has been about trying to show this world as otherworldly,” she explains. “Before this I produced the Glace Noir series, which is very dark and mysterious.” These images use a similar subversion by representing vast glaciers in a palette of inky blacks and blues. “Both projects actually have a lot in common, it’s about representing this otherworldliness, and infrared has simply given me another tool to express what I was already exploring.”

The bizarre tension created by these vivacious colours adds an unsettling edge, as if you might be on a distant planet or in a parallel universe, but at the heart of it they are all incredibly joyous. “It’s impossible for me to escape the fact that I’m a child from the 80s. On the one hand these photographs represent another world entirely, but on the other they feel like they could be populated by my childhood Barbie dolls, attending MTV dance parties with a cocktail in their hand!”

Courtesy of Another Mag

Universe of Words By Emmanuelle Moureaux