Using a Stalinist building to host a restaurant called Pink Mama would once have been considered a rebellious act, but this is the beauty of marketing in the times of globalization: when it comes to expressing your creativity, you can channel any cultural references you please, and leave it to post-democratic forums like social media to take it from there and issue a verdict. Pink Mama opened its doors in late 2018 as part of the LL Group of restaurants owned by Liki Lewin and Ardy Tuzhba, and its interiors are an absolute instagrammable sensation courtesy of media darling Harry Nuriev, the star designer and owner of New York and Moscow-based Crosby Studios, who defined the restaurant’s style as “new avant-garde with a Russian-Japanese mood”.

Pink Mama is to be found on Krasnopresnenskaya Naberezhnaya Street in Moscow, right in the historical heart of Stalinist Russia. This is an area around the banks of the Moskva River hosting several government agencies, just 1.4 kms away from the Moscow White House. In fact, the professionals working in many of the offices around here are only one generation apart from the Stalinist era, so the connotations used by Nuriev are alive and, in some ways, still relevant.  A loose connection to the past is exactly what Crosby Studios wished to highlight while instilling the restaurant with a modern, almost hipster vibe. High ceilings set the tone of the décor, offering a big canvas for Soviet tones like industrial rusty green and faded dusty pink, and provide enough space for a large red star to hang on the bar wall as a symbol of the building’s history. Nuriev is known and celebrated for his fresh take on cultural symbols and his monochromatic interiors that create interesting layers, so this nod to history through colour and shape is right up his alley. Nostalgia also sets the tone for the project’s layout which follows the same floorplan of the restaurant that once operated in the same space, divided as it is into two distinctive zones, dedicated to food and alcohol respectively. The bar is dark, red and bold, with dimmed lighting creating a secretive aura, while the restaurant hall is light, airy and bright, almost exposed to the street outside. Large glass windows allow for natural daylight to come in through folding screens resembling those used to create private dining booths. Acrylic mirrors covering part of the walls offer a fascinating continuity to the fabric screens and windows, while the big round tables bring back a sense of old school formality. The materials used are the same throughout: light fixtures, tables and decorative elements made of copper, stainless steel food displays, perforated MDF covers, velvet furniture, and oak veneer finishes in varying colours, create a very contemporary setting. The imposing concrete walls that run throughout the space change colour, from mint green to blood red, depending on the room, while the mosaic floors look as if shiny pieces of confetti in pink, gray or red have been scattered across the white marble. But the party here is not over; in fact, it has just begun. 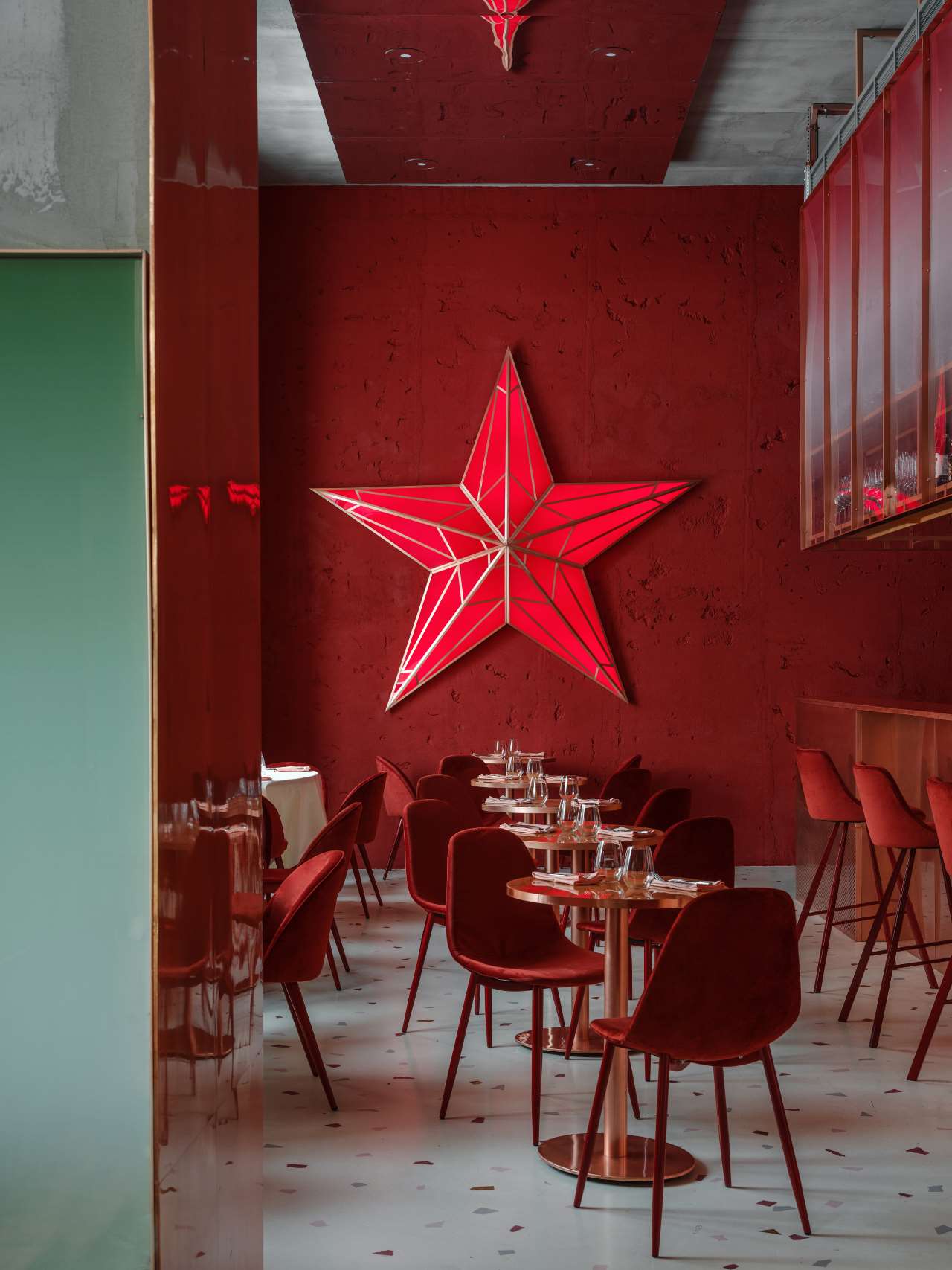 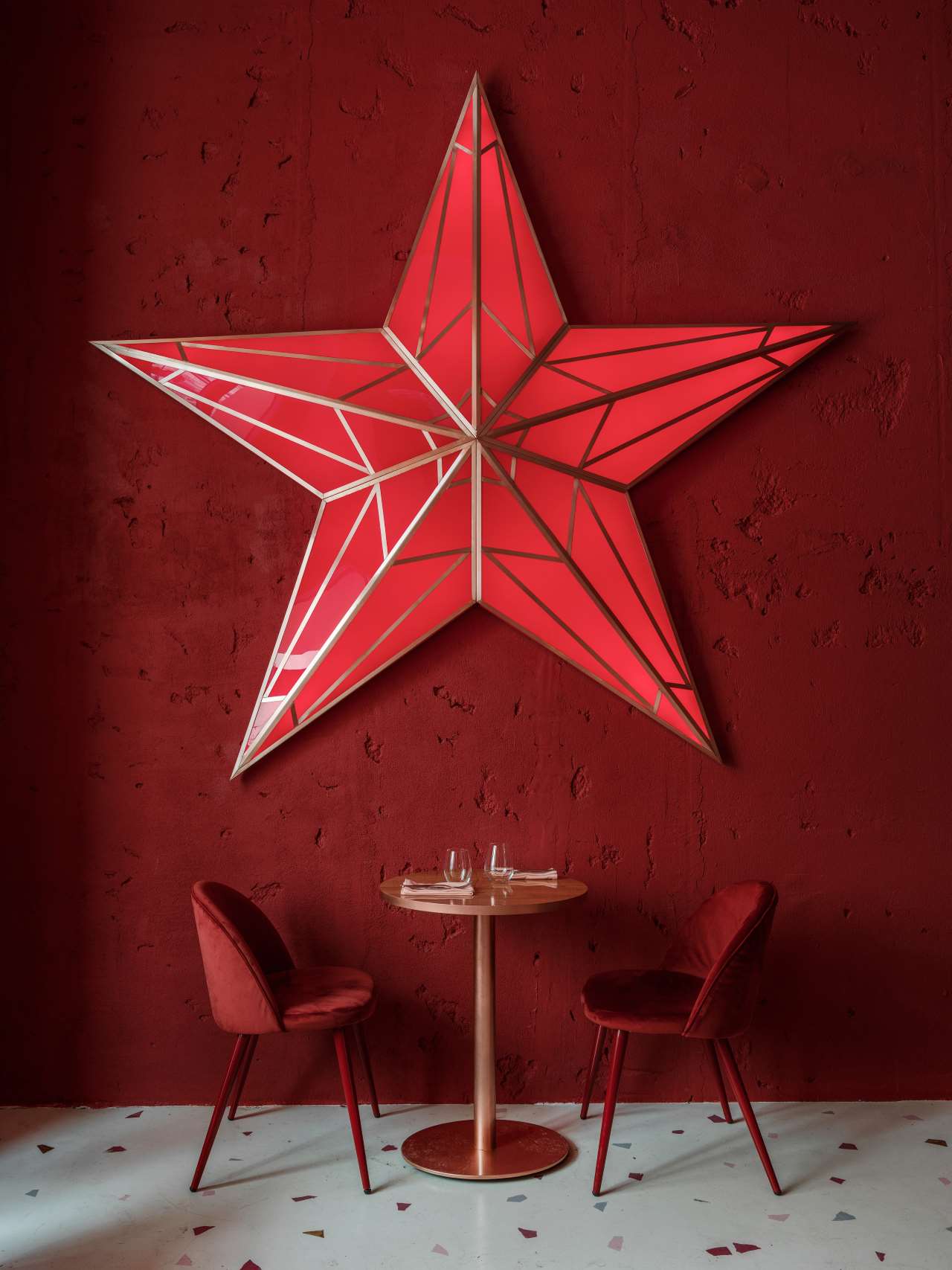 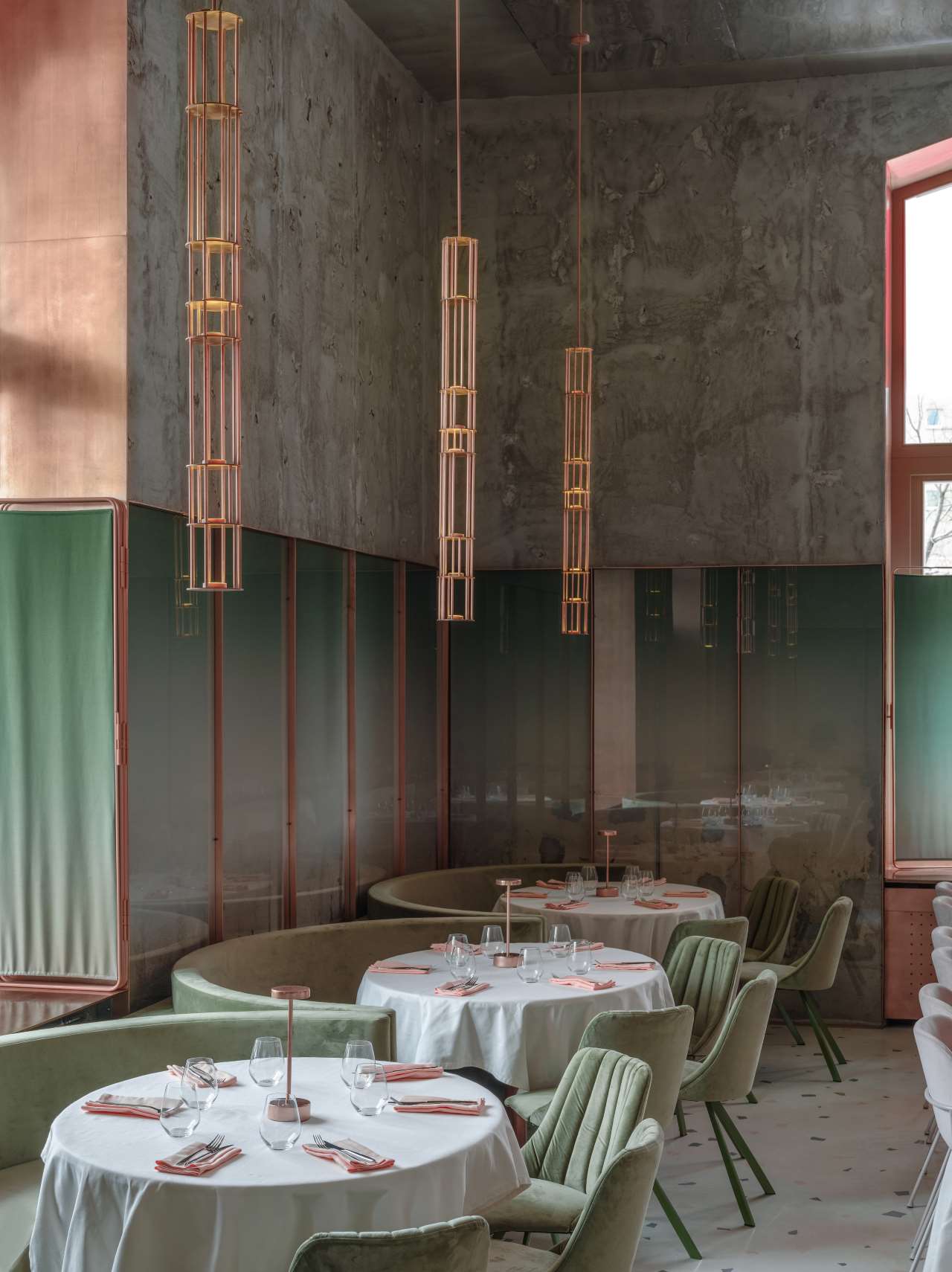