Vivienne Westwood, Priestess of Punk Iconoclastic British designer rose to prominence by outfitting the Sex Pistols as punk took off in the 1970s

Dame Vivienne Westwood, the pioneering British fashion designer who played a key role in the punk movement, has died in London at the age of 81.

Westwood died “peacefully, surrounded by her family” in Clapham, south London, on Thursday, her representatives said in a statement. She had continued to do the things she loved, including designing, working on her book and making art “up until the last moment”, they added.

Her husband and creative partner, Andreas Kronthaler, said: “I will continue with Vivienne in my heart. We have been working until the end and she has given me plenty of things to get on with. Thank you darling.”

Born in Tintwistle near the town of Glossop, Derbyshire, in 1941, Westwood moved with her family to London in 1957, where she attended art school for one term. A self-taught designer with no formal fashion training, Westwood learned how to make clothes as a teenager by following patterns and by taking apart secondhand clothes she found at markets in order to understand the cut and construction. 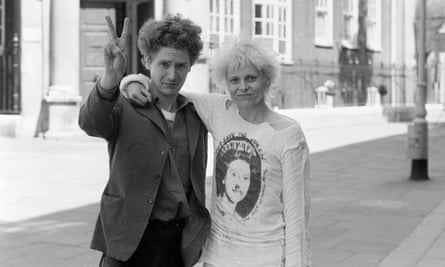 She met the band manager Malcolm McLaren in the 1960s while working as a primary school teacher after separating from her first husband, Derek Westwood. The pair opened a small shop on Kings Road in Chelsea in 1971 that became a haunt of many of the bands she outfitted, including the Sex Pistols, who were managed by McLaren.

Her provocative and sometimes controversial designs came to define the punk aesthetic, and Westwood would become one of Britain’s most celebrated fashion designers, blending historical references, classic tailoring and romantic flourishes with harder-edged and sometimes overtly political messages.

Westwood and McLaren’s shop changed its name and focus several times, including rebranding as Sex, – the pair were fined in 1975 for an “indecent exhibition” there – as well as Worlds End and Seditionaries.

Westwood’s first catwalk show, in 1981, for her Pirates collection, was an important step in the punk rebel becoming one of the fashion world’s most celebrated stars. But she still found ways to shock: her Statue of Liberty corset in 1987 is credited as starting the “underwear as outerwear” trend.

Even as Westwood’s design empire grew into a multimillion-pound business, the designer never lost her activist streak. In 1989 she posed for the cover of Tatler magazine dressed as Margaret Thatcher, over a caption that read: “This woman was once a punk.” She later told Dazed Digital: “The suit I wore had been ordered by Margaret Thatcher from Aquascutum, but she had then cancelled it.”

Since her earliest punk days, Westwood remixed and inverted imagery drawn from the British monarchy. When she was granted an Order of the British Empire medal in 1992, the designer wore a sober grey skirt suit to accept the honour from Queen Elizabeth II. Outside Buckingham Palace, she gave a twirl to waiting photographers, revealing to all the world that she had worn no knickers.

Westwood was invited back in 2006 to receive the even more auspicious designation of Dame Commander of the British Empire.

In the mid 2000s, Westwood turned her political focus towards the climate crisis. In 2007, she published a manifesto titled Active Resistance to Propaganda, in which she wrote: “We have a choice: to become more cultivated, and therefore more human – or by not choosing, to be the destructive and self-destroying animal, the victim of our own cleverness (To be or not to be).”

As an anti-consumerist, Westwood gleefully undermined her own business interests. In 2010, she told AAP: “I just tell people, stop buying clothes. Why not protect this gift of life while we have it? I don’t take the attitude that destruction is inevitable. Some of us would like to stop that and help people survive.”

In 2015, she drove a tank to the then prime minister, David Cameron’s home in Oxfordshire, in a protest against fracking. As a vegetarian, Westwood lobbied the British government to ban the retail sale of fur alongside other top designers including Stella McCartney.